An area of land that runs parallel to U.S. Route 1 between Washington, D.C. and Baltimore has been dubbed Dinosaur Alley, and it is believed to hold "one of the largest concentrations of dinosaur fossils on the East Coast." Fossils from the Early Cretaceous Period (about 100 millions years ago) can be found in this section of Maryland. 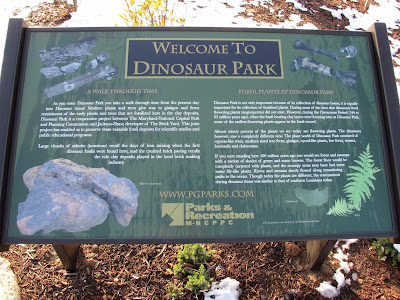 Dinosaur Park opened in the Muirkirk section of Laurel, Maryland last year as a joint venture between the Maryland-National Capital Park and Planning Commission (M-NCPPC) and developer Jackson-Shaw. The park provides an opportunity for amateur paleontologists to search for fossils under the guidance of scientists and other volunteers. 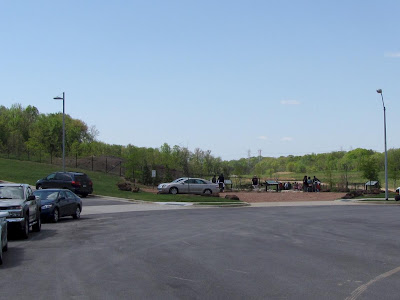 The park sits at the end of Mid Atlantic Boulevard at the back of a business park known as The Brick Yard. Iron ore was mined and processed for hundreds of years on the land near the park entrance, and a brickyard operated at the location until 1990. Developer Jackson-Shaw purchased the brickyard property in 2005. Although the M-NCPPC acquired land adjacent to the Jackson-Shaw property to protect some of the fossil rich area, the M-NCPPC property lacked good public access, and the fossils were only exposed on the Jackson-Shaw property. Jackson-Shaw came through with a $1 million land donation to Prince George's County, and the developer spent $125,000 to help create the park. A security fence was installed to protect the sensitive area, and some species of plants and trees that would have been found at the site 100 million years ago were planted. 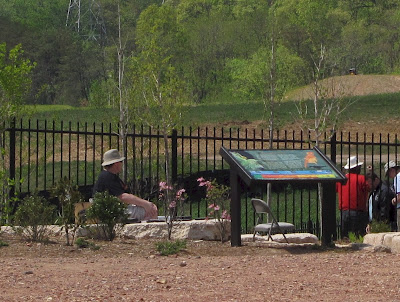 The park entrance features signs containing a brief history of the site and information about dinosaurs in Maryland. Visitors can read these signs while waiting for the next instructional session to start.

On the day we visited Dinosaur Park, amatuer paleontologist Dave Hacker (pictured above in the chair) introduced guests to the park. 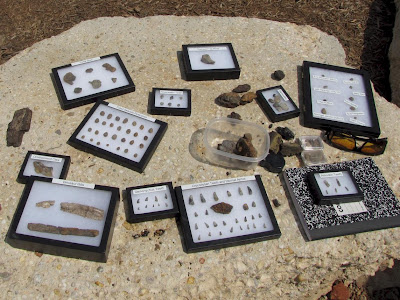 Hacker told us that most of these fossils were found at the Dinosaur Park site. Many were found by him. 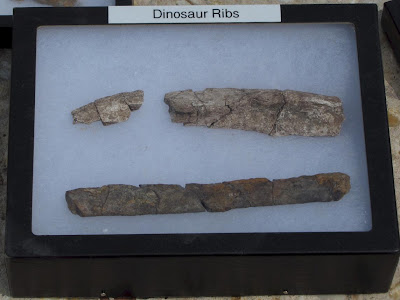 Dinosaur Ribs. Different sections of the bottom rib were found on different visits to the site, and they were later discovered to fit together. 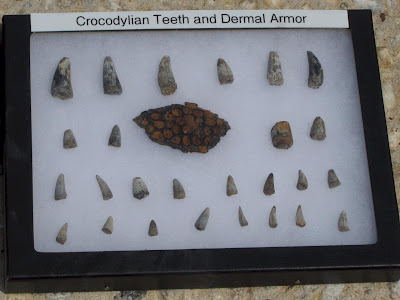 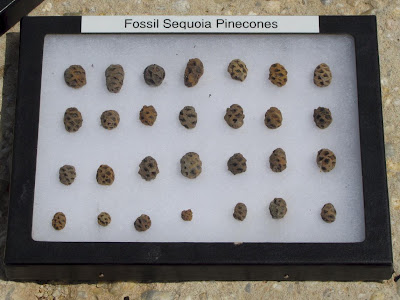 If you were standing here 100 million years ago, you would see forest and swamps with a variety of shades of green and some browns. The forest floor would be completely carpeted with plants, and the swampy areas may have had some water lily-like plants. Rivers and streams slowly flowed along meandering paths to the ocean. Though today the plants are different, the environment during dinosaur times was similar to that of southern Louisiana today. 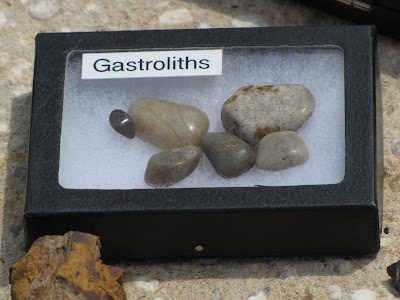 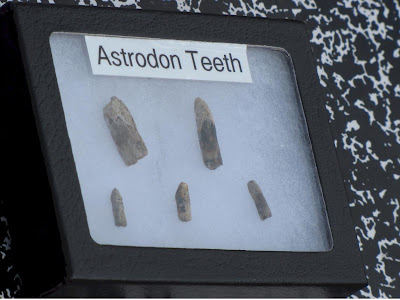 Astrodon Teeth. The Astrodon has been recognized as the official dinosaur of Maryland since 1998. 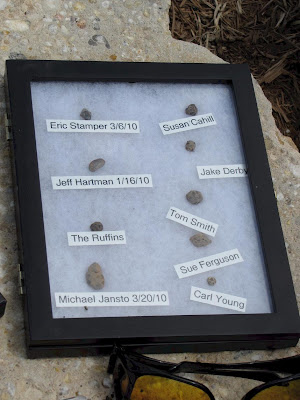 The Dinosaur Park Hall of Fame: items found at the park by visitors since the park's opening last fall. One noticeable omission is the tail bone from a meat eating dinosaur found by 9-year-old Gabrielle Block. Read about her story in this Washington Post article.

Visitors are not allowed to take anything from the park. Items of interest found at the park are put into plastic bags, and the name of the person who discovered each item is recorded. Fossils of greatest significance are offered to the Smithsonian Institution. 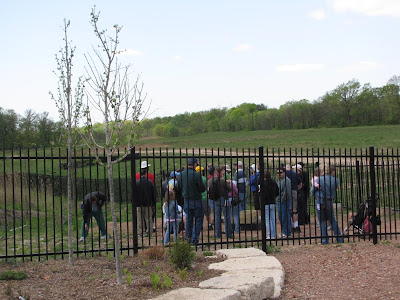 Paleontology 101. A group of visitors receives instructions on what to do and what not to do while looking for fossils in the park.

Visitors are not permitted to dig or use any tools while hunting for fossils. Visitors search the surface for fossils that have been exposed by the rain. Hacker said that there had been at least one instance where an uninformed visitor brought shovels and other tools. 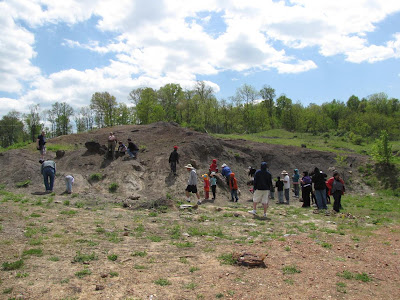 A group of visitors to the park search for fossils. The hill in the background contains the fossils. Over time, rain slowly releases the fossils from the hill. 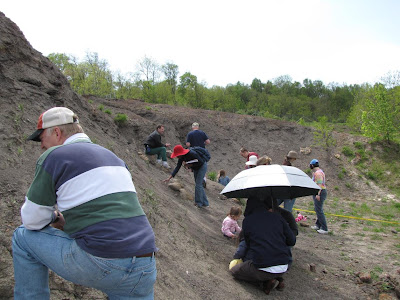 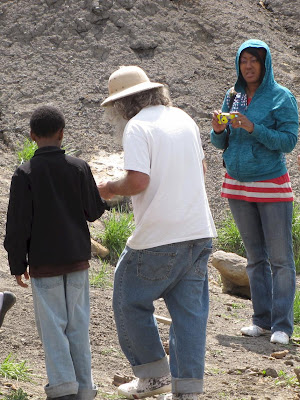 Dr. Kranz is one of the most knowledgeable authorities on Maryland dinosaurs. He runs the Dinosaur Fund - a "not-for-profit organization to help raise money for dinosaur research in the National Capital Region," and he has also participated in many dinosaur camps to educate kids about dinosaurs and paleontology. You can read some of his articles here.

I wish I had taken a picture of the front of his t-shirt. It has a picture of an Astrodon with the caption, "Maryland's First Citizen" 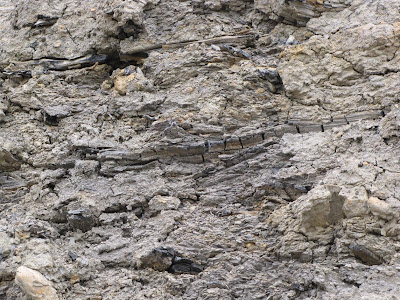 Here is a close-up view of side of the hill - just out of reach. Over time, the rain will wash fossils out of the hillside to be discovered by park visitors. It's against the rules to climb at the park. 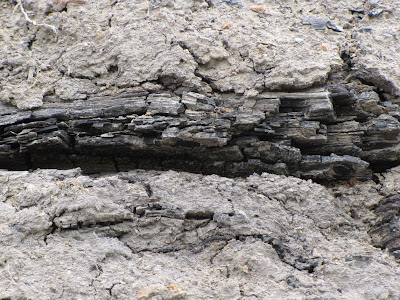 Remnants of 100 million year old trees that look like burnt wood can be seen all over the park. This picture shows wood embedded in the side of the hill that has been exposed by the rain. 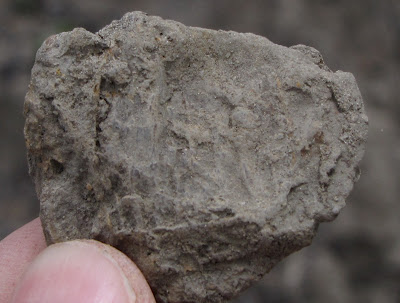 The first thing that I realized when I started scanning the hillside is that I really didn't know what to look for. I found several rocks like this one that had indentations that the expert volunteers said were probably made by plant material. Although I thought that was interesting, when I showed a similar rock to Dave Hacker, he ended the conversation by saying, "let me do the honors," and he threw the rock off to the side. 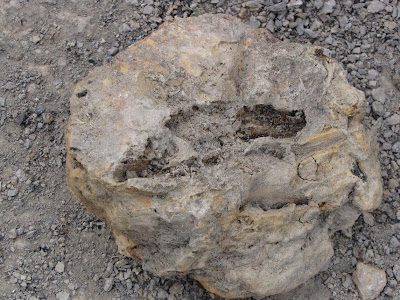 The surface of this large rock (about 2 feet wide) contains several imprints, including an interesting one on the right/center side of the rock. Dave Hacker said that there has been some discussion of having a rock breaking event where visitors break open rocks found on the site to see what's inside. 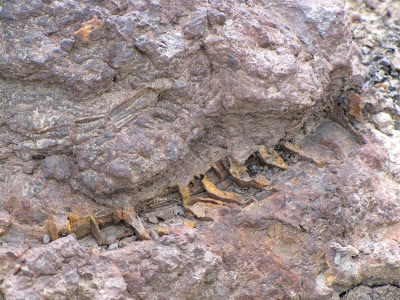 According to one of the volunteers (Susan), the indentations on the this rock were probably made by plant material.

The park is open from noon to 4pm on the first and third Saturday of each month (weather permitting). Young kids are welcome. I saw kids as young as three during our visit. I was told that the volunteers sometimes help visitors with a sifting activity. I saw the sifter there on our visit, but it wasn't in use.