Legend has it that an asylum for the criminally insane once operated on the grounds of the shuttered Glenn Dale Hospital near Bowie. A different story claims that the buildings on the hospital grounds are "sick" with tuberculosis, and anyone entering these buildings may catch the disease. Yet another rumor claims that experiments on patients at the hospital resulted in the creation of a creature with a human body and the head of a goat - the legendary Goat Man that roams the woods near Bowie. These are all tales that can be found on the Internet, seen on the pages of Weird Maryland and heard in conversations with Prince George's County locals.

The truth is that the 23 building campus was originally built to treat tuberculosis patients, and after a cure for tuberculosis was discovered, the facility was used as a nursing home for the poor. The presence of large amounts of asbestos finally forced the closure of the hospital in the early 1980s, and the buildings on the property have been abandoned since that time. Some police training took place on the grounds of the hospital, but the majority of visitors to the site since the closure are young party goers, urban explorers and ghost hunters. 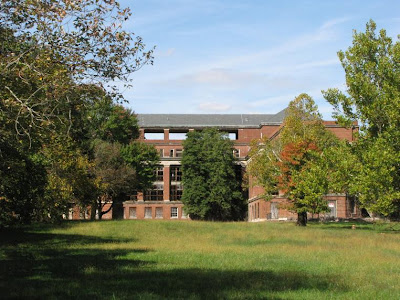 This building is known as the adult hospital building. Although it was not the first building to be erected on the 216 acre site, it is referred to by many as the main building. The adult hospital building appears to be the most explored, most photographed and most vandalized. Points of interest in this building include patient rooms, a theater, a morgue and basement tunnels connecting this building to other structures on the campus. Urban explorers report that the tunnels are partially flooded with water, and they are not suitable for exploration. 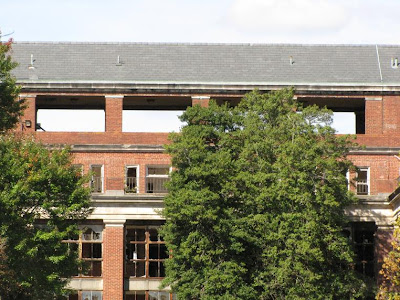 Here is a closer look at the adult hospital building. Lots of fresh air was considered essential to the treatment of tuberculosis patients, and that therapy was taken into consideration when the hospital was designed. The top of the building contains an open air walkway that can be seen at the top of the picture. Patients also had access to a large balcony from their rooms on the second floor, and the balcony railings can be seen in the picture above. Urban explorers that are familiar with this site know to keep away from these open areas to avoid detection.

The Washington Post Magazine published an emotional story a few years back about one family's struggle with the forced hospitalization of a loved one at Glenn Dale Hospital in the 1950s. Etta Young spent 114 days living in a room on the second floor of the adult hospital building, and she spent countless hours in the fresh air of the balcony. The physical and emotional scars from her time at Glenn Dale Hospital stayed with her for a lifetime. 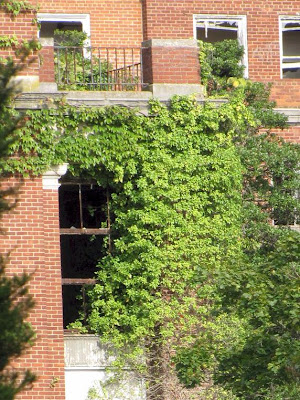 Ivy grows through a first floor window at the adult hospital building. A second floor balcony railing is visible above the window. 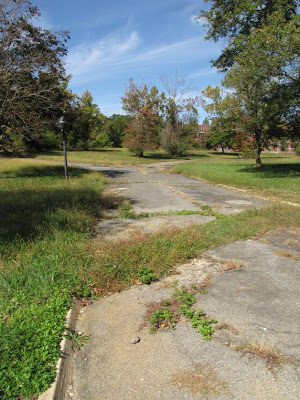 This is the end of the semi- circular drive in front of the adult hospital building. 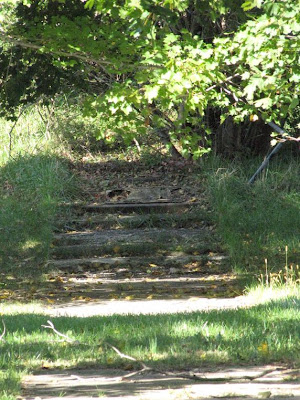 The sidewalk and steps that once led to the front door of the adult hospital building are blocked by vegetation. 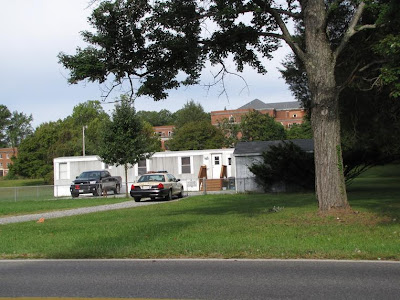 Whether you consider yourself an urban explorer or a fun loving party animal, the Park Police consider you a trespasser. This police substation is located directly in front of the adult hospital building, and some reports claim that an officer or two actually live here. I took all of my pictures from the edge of Glenn Dale Road - from the legal side of the "No Trespassing" signs. 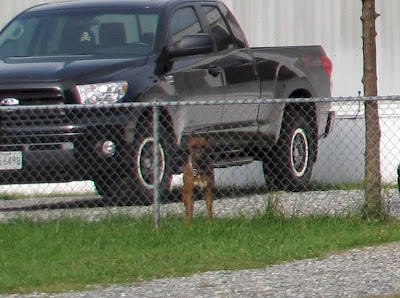 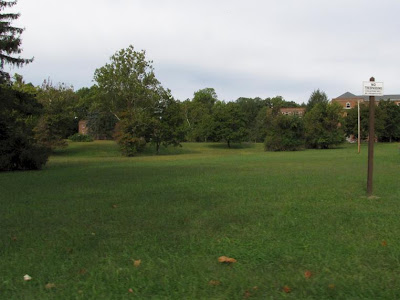 The Glenn Dale, Maryland site was chosen for the hospital because of its remote location and abundant country air. Most of the property still contains undeveloped open space, including this spot to the South of the adult hospital building. I doubt many people these days would consider this location remote. 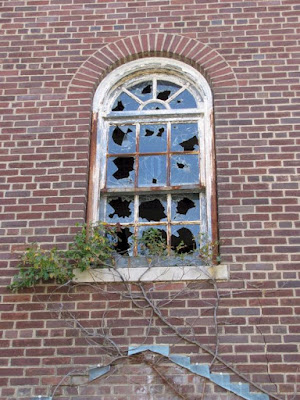 The first buildings to open at Glenn Dale Hospital in 1934 supported the treatment of children suffering from tuberculosis. Nurses working with the children were housed in the building pictured above. This structure is located about 30 feet from the edge of Glenn Dale Road - directly across from the Park Police substation. 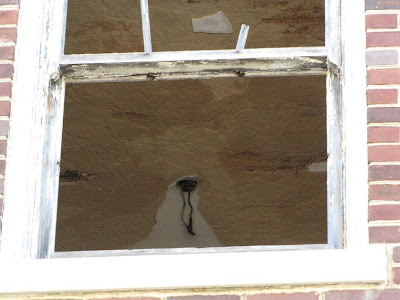 Here is a closer look in one of the windows in the nurses' quarters. Electrical wires hang from above, and plaster and concrete are missing from the ceiling. These buildings are falling apart. 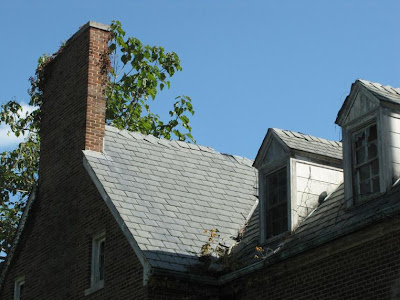 A slate roof covers the nurses' quarters. Some of the tiles have come loose and have smashed on the ground below. The adult hospital building and other structures have slate roofs too. 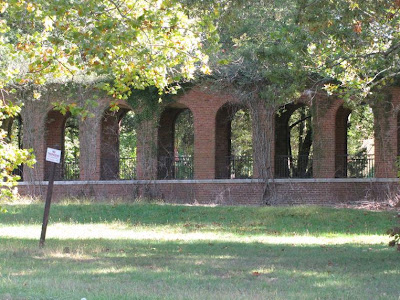 An open walkway connects two buildings that housed the nurses. 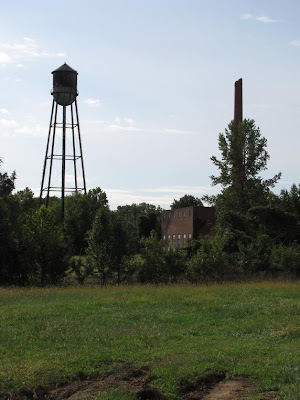 The water tower and incinerator.

There is no shortage of people that have explored the insides of the Glenn Dale Hospital buildings. The Opacity Web site contains a terrific collection of pictures of Glenn Dale Hospital and other abandon sites throughout the world. I also found this informative site containing maps, pictures and some history of the hospital. My wife came across a YouTube video featuring our next door neighbor and his friends exploring the adult hospital building. The video is somewhat interesting, but you have to put up with teenage boys being teenage boys for six minutes.

The Bowie Baysox and Tulip Gulch Productions are hosting a haunted house each Saturday and Sunday in October for people 14 and older (click here for details). This year's show is called Glenn Dale Asylum Haunted House. The following promotional video contains some of the pictures from the Opacity slide show.

The future of the Glenn Dale Hospital site is still unknown. The Prince George's County Council is in the process of updating the master plan for the Lanham, Seabrook and Glenn Dale areas, and the Gazette reports that residents would like the county to do something with the site. The Maryland-National Capital Park and Planning Commission (M-NCPPC) is in the process of nominating the Glenn Dale Hospital site for placement on the National Register of Historic Places to ensure that the open space be preserved. Current Maryland legislation restricts the use of the land as follows.

Maryland House Bill 113 restricts M-NCPPC’s use of the Glenn Dale Hospital site, requiring that 150 acres be kept as open space in perpetuity and the remaining 60 acres be sold or leased to a developer of a continuing care retirement community.